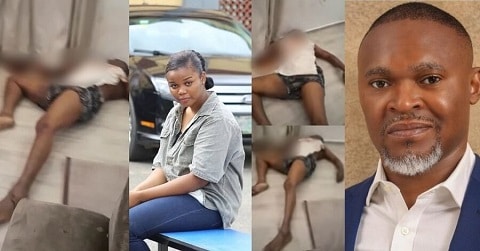 The Reps asked the NPF to stop the ongoing media trial of Chidinma Ojukwu.

The House of Representatives has cautioned the Nigeria Police Force over interviews being granted by suspected murder, Chidinma Ojukwu.

The Reps asked the NPF to stop the ongoing media trial of Chidinma Ojukwu.

Recall that Chidinma is alleged to have killed the Chief Executive Officer of Super TV, Usifo Ataga.

This followed the adoption of a motion of urgent public importance moved by Rep Tolu Sadipe at the plenary on Tuesday.

Sadipe while moving the motion, raised concerns over the unending parade and media trial of the suspect by the police.

The lawmaker said the police should rather conclude its investigation in Chidinma’s matter and charge her to court for trial rather than the ongoing media trial the suspect is being made to go through.

We had earlier reported that Chidinma was first paraded by the Lagos State Commissioner of Police, Hakeem Odumosu, on June 24 at the Police Command in connection with the murder of Ataga.

The suspect has not been charged to court yet.

She has made a series of confessional statements through media interviews granted to both the print and electronic media while in the custody of the police.

Meanwhile, in a video that went viral on Monday, Chidinma denied killing the Super TV CEO, a claim that is contrary to her initial confession.

According to the undergraduate, the deceased had locked the room before she left, but she was surprised when she came back to find out that the room wasn’t locked.

Chidinma added that she fled with a bag containing his credentials because she was confused about what to do as he was already dead.