PSG unveil Lionel Messi as he opts for jersey number 30 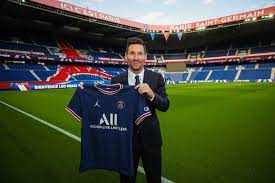 Paris Saint-Germain have officially announced the signing of Argentine forward, Lionel Messi on a two-year deal as a free agent for £25m.

Messi’s move to Paris was confirmed on Tuesday after he agreed terms with the Ligue 1 giants. Barcelona’s removal of Messi’s mural from the Camp Nou sealed it.

Announcing the 34-year-old’s arrival, PSG wrote, “Paris Saint-Germain is delighted to announce the signing of Leo Messi on a two-year contract with an option of a third year.”

Meanwhile, Messi has opted to go with number 30 on the back of his jersey, the same number he used in his breakout season at Barcelona.

There are reports that teammate, Neymar who wears the number 10 offered it to Messi but he turned down the gesture.

He joins Barcelona following an unexpected end to his Barcelona career after the club fell foul of LaLiga’s financial fairplay rules.