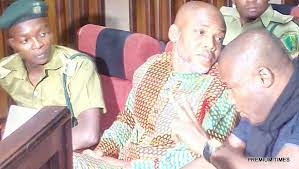 A Federal High Court, Abuja, on Monday declined the request of the Leader of the Indigenous People of Biafra (IPOB), Nnamdi Kanu, to be moved to Kuje Correctional Service Centre.

Justice Binta Nyako, in a ruling, turned down the application by Nnamdi’s Lawyer, Ifeanyi Ejiofor.

Earlier when the matter was called, the leader of the IPOB was not brought to the court by the Department of State Services (DSS).

Counsel to the Attorney General of the Federation (AGF), M. B. Abubakar, informed the court that though he was ready to proceed, the defendant (Kanu) was not in court.

Ejiofor, however. expressed worry over the absence of Kanu in court.

The lawyer alleged that his client was subjected to dehumanising conditions and that he had no access to his lawyers while he was in the custody of the DSS.

Ejiofor, who said he had not seen his client for over10 days, told the court that the information reaching him was that Kanu had been taken away to an unknown destination.

He said he had a motion on notice filed before the court, seeking for “an order of this Honourable Court directing the transfer of the Applicant from the custody of the National Headquarters of the State Security Service to the Nigerian Correctional Service Centre in Kuje, Abuja, within the jurisdiction of this Honourable Court, where he was originally detained before he was granted bail, pending the determination of the charge.

Nyako said though the earlier remand order at the DSS facility still subsisted, she made an order for the lawyers to be given access to their client (Kanu).

“No, I am not transferring him to correctional centre. I am keeping him there (DSS custody) and I am going to make an order that you should be given access,” she said

The judge, however, noted that the access to Kanu would be regimented.

“But it is not going to be all conners affairs; it will be regimented. You can’t get up at night and say you want to visit your client,” she stated.

Justice Nyako, who condemned the prosecution’s act for not producing Kanu in court, ordered that Kanu should be produced in court in the next adjourned date.

“Before you can take a criminal case, the defendant must be in court. I have been sitting down here since waiting for you.

“I will not take this kind of practice in the conduct of this case. When I give you a date, I want you to continue on that date.

“And you cannot continue until the defendant is present,” she held.

Nyako said he had not make any order for the trial to continue in Kanu’s absence, hence he must be brought to the court to stand his trial.

“Please do the needful and don’t allow this to happen again,” she told the prosecution.

She also noted that since the court vacation had started, a fiat from the Chief Judge of the court, Justice John Tsoho, would be needed to give the matter accelerated hearing.

She adjourned the matter until Oct. 21 for trial continuation.

The News Agency of Nigeria (NAN) reports that besides the former Governor of old Anambra, Chief Chukwuemeka Ezeife who was in court to monitor the proceeding, the Ohaneze Ndigbo was represented by a lawyer, Chief A. G. Nwanzuruike, while Barrister M. C. Udebuani appeared for an association of all the Igbo lawyers in Abuja (Otuotiwu).

NAN on June 29, reported that the judge had ordered the IPOB leader to be remanded at the Department of State Services (DSS) facility pending the hearing and determination of the matter

The order followed an application by Counsel to the Attorney General of the Federation (AGF), Shuaibu Labaran, that Kanu, who jumped bail and rearrested, be remanded in the DSS custody.

The court also granted the request that the matter be given accelerated hearing to guard against delay in justice and fixed today for trial continuation.

NAN reports that Kanu, who was rearrested on July 27 abroad, was said to have jumped bail around September 2017.

He was, however, produced before the trial judge, Nyako, on June 29 to stand his trial.

The judge had, on March 28, 2019, issued a bench warrant for Kanu’s arrest after she revoked the bail that was earlier granted him.

Relying on Section 352(4) of the Administration of Criminal Justice Act (ACJA), 2015, the court equally okayed Kanu’s trial in absentia.

Kanu was arrested on October 14, 2015, on 11-count charge bordering on terrorism, treasonable felony, managing an unlawful society, publication of defamatory matter, illegal possession of firearms and improper importation of goods, among others.

He was charged alongside three other pro-Biafra agitators; Chidiebere Onwudiwe, Benjamin Madubugwu and David Nwawuisi.

Shortly after he was declared “missing,” Justice Nyako, on February 20, 2018, okayed a separate trial for the other three defendants.

The IPOB leader who has dual citizenship was before his arrest reportedly sighted at various locations outside the country, including Jerusalem and the United Kingdom (UK).

Kanu who was the Director of Radio Biafra was initially arrested by security operatives on October 14, 2015 upon his arrival to Nigeria from his base in the UK.

He was subsequently arraigned in court on January 20, 2016, and remanded at Kuje prison in Abuja.

After he had spent about a year and seven months in detention, the trial court, on April 25, 2016, released Kanu on bail on health ground.

Following Kanu’s disappearance after he was released on bail, the court, on Nov. 14, 2018, ordered the three sureties to forfeit the N100 million bail bond they each consented to.

All the sureties had since approached the Court of Appeal in Abuja to challenge the ruling.

Kanu’s lawyer, Ifeanyi Ejiofor had equally protested the revocation of his client’s bail, even as the court rejected his request for time to file affidavit evidence to explain why he jumped bail.

Ejiofor had insisted that Kanu’s disappearances was occasioned by the unwarranted invasion of his home at Afaraukwu in Abia State by the Nigerian Army.

The claim Kanu restated when he was brought before the court after his rearrest.